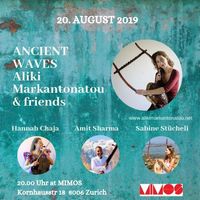 Aliki Markantonatou & friends present "Ancient Waves" Ancient Waves is a performance where the four musicians will share the MIMOS stage. We are inviting you to share this night with us and to invoke the muse in you!

Aliki Markantonatou is a composer and performer of the ancient Greek Lyre. She lives in Athens and is known for her concerts all through Greece, Barcelona, Istanbul, Asia Minor and China. Aliki composes ancient Greek lyrical poetry into melodies, sings fragments from antiquity and adapts rebetiko and traditional songs to the sound of the Lyre.

Amit Sharma is living in Zurich, is a professional Dhrupad vocalist, who established himself in India and Europe. Amit is from a traditional North Indian music family and has his music school in Zürich. Dhrupad is old classical North Indian Music and the only style in India nowadays, which preserved the ancient Vedic Raga music in its pure form.

Sabine Stücheli is a performer, vocalist and voice coach. She is a student of both, Amit Sharma and Aliki Markantonatou.

Hannah Chaja is a classical trained swiss cellist who plays in different world music projects (for instance with the senegalese kora player Sadio Cissokho). She teaches Cello in the music schools of Zollikon and Zürich.