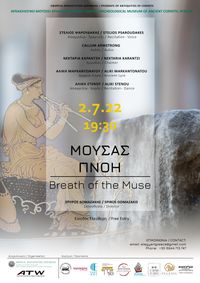 BREATH OF THE MUSE

Ancient Corinth Archaeological Museum, Atrium BREATH OF THE MUSE Concert with Ancient Music, Recitation, Singing & Dance At the museum’s atrium ….where the ancient statues whisper their secrets, for the ones who can listen, ancient sounds are echoing with beauty. A unique collaboration of experts on the reconstruction and performance of the Ancient Greek and Roman Music and Aulos is going to be presented at the Museum of Ancient Corinth on Saturday, July 2, 2022, at 19:30, free entry. For the first part Stelios Psaroudakes, archaeomusicologist and scholar, will meet on stage Callum Armstrong a highly appreciated auletes. They both will present original ancient Greek musical fragments; among them, the first stasimon of Orestes by Euripides (408 BC) and the First Delphic Hymn by Athenaeus (128/27 BC) will be performed. Nektaria Karantzi, the international Byzantine chanter, will present the significant early Christian Hymn to Aghia Triada (3rd cent.AD) which signifies the transition from the ancient years and paganism to those of early Christianism. Modern era has its place at this concert, where Callum Armstrong is going to present compositions for the reconstructed "Louvre Aulos".
Aliki Markantonatou, ancient lyre musician, will join the performance with her reconstructed lyre and Aliki Stenou, actor and dancer with vast experience on Ancient Greek Drama, will participate both as actor and dancer. WITH STELIOS PSAROUDAKES, Recitation – Voice CALLUM ARMSTRONG, Aulos NEKTARIA KARANTZI, Chanter ALIKI MARKANTONATOU, Ancient Lyre ALIKI STENOU, Recitation - Dance SPIROS DOMAZAKIS, Director NENAD RADOSEVIC, Sound Production ATW PRODUCTIONS Video Recording/Video Production